The spectroheliograph is used to image the sun in the Ca-K line at 393.37nm. An equatorial mounted 18 inch diameter silver-on-glass plane mirror (Fig: 1a; M1 in Fig: 2a), driven by differential electric motors is used as a siderostat. Clock drive of the siderostat compensate for earth's rotation and ensures that reflected rays from the sun will always be on the slit (S1 in Fig: 2a) of the spectroheliograph. Reflected rays from the siderostat mirror (M1) passes through the 12'' diameter achromatic triplet lens (L1 in Fig: 2a) whose focal length is 21 feet. This lens focuses the image on the slit (S1). Diameter of the solar image is about 60mm. Light passing through the slit is then collimated by a doublet lens (L2 in Fig: 2a) and falls on a plane mirror (M2 in Fig: 2a). The reflected light from mirror (M2) pass through a set of two prisms (P1 and P2 in Fig: 2a) which produce dispersed spectrum. An achromatic lens (L3 in Fig: 2a) is used for focusing the spectrum as it pass through a violet filter (F1 in Fig: 2a) that restricts the wavelength of image to 3933A, the location of Ca-K line. A slit (S2) is kept at the focal plane of L3, in front of the photographic plate (P in Fig: 2a). This plate and slit (S2) are systematically moved slowly by a hydraulic mechanism to scan over sun's image. The design of this spectroheliograph was specified by George Ellery Hale, who is the inventor of spectroheliograph. H-alpha images are also obtained using the same instrument, after replacing the prisms with two mirrors, as shown in Fig: 2b.

A 4-inch refractor telescope with an objective lens of 5 feet focal length was brought to the site in 1898 from Madras for visual observations of solar disk. This is one of the oldest telescopes of Kodaikanal. Direct photography of the sun commenced at Kodaikanal in August 1903. Exposure time used was around 1 ms, and the solar images were of 8-inch diameter. This telescope was upgraded later to a 6-inch objective with a focal length of 8 feet. The new 6" telescope started its operations from 31st July 1912. The camera used to photograph the solar images had a metal plate as focal plane shutter. The shutter is activated by releasing a metal spring. Once released, this shutter slides across an aperture, providing an exposure with a duration of about 0.001s. Even today, this same procedure is used to take daily photoheliograms at the observatory. 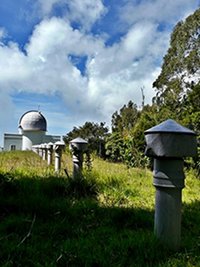 The tunnel telescope uses a siderostat consisting of a 60 cm diameter plane mirror mounted on 11 m tall tower platform to direct sunlight into a 60 m long underground horizontal 'tunnel'. A 38 cm aperture f/90 achromatic lens forms a 34 cm diameter solar image at the focal plane. The telescope has an option to mount a 20 cm achromat, which provides an f/90 beam to form a 17 cm image. A Littrow-type spectrograph is the main instrument of the telescope. A 20 cm diameter, 18 m focal length achromat in conjunction with a 600 lines/mm grating gives 9 mm/A dispersion in the fifth order of the grating. Together with the 5.5 arcsec/mm spatial resolution of the image, it forms a high resolution set up for solar spectroscopy. Recording of the spectrum can be done photographically or with a Photometrix 1k x 1k CCD system. A large format CCD system is being procured to enhance the coverage of spectrum especially for the broad resonance lines and the nearby continuum. The converging solar beam from the objective can be diverted to a high dispersion spectroheliograph with Littrow arrangement using a 3.43 m achromat. The photographic camera behind the second slit is being replaced by a Raticon linear array and a data acquisition system.